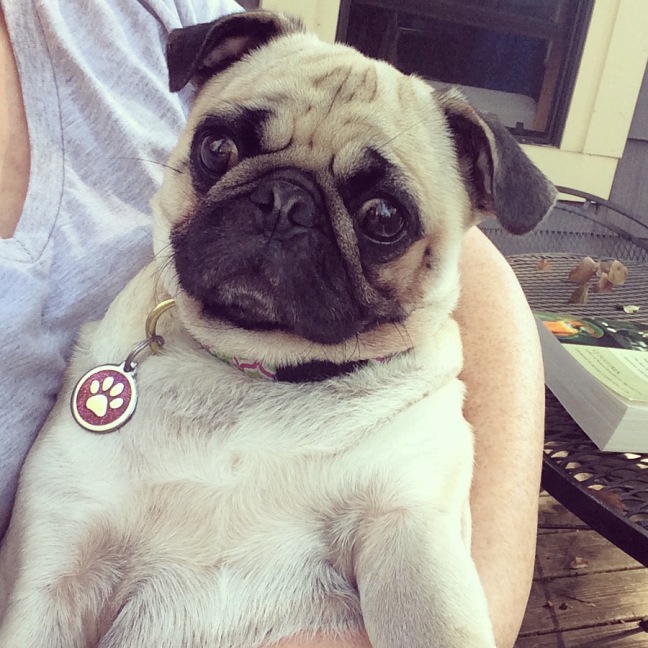 Since starting down our HOListic road, I’ve realized how quickly I run to my vet for every little thing. If I took the time to gain a little bit of knowledge of my own, perhaps I could address some problems at home.

Exhibit A: The abscess on Truman’s paw that healed with topical application of raw honey.

But we haven’t quit our vet habit yet.

Pearl picked up a splinter.

I didn’t know she had a splinter. She wouldn’t let me touch her hand to get a closer look.

SHE BROKE HER WRIST JUMPING OFF THE BED!! SHE’S ONLY 3! HER BONES ARE SO FRAIL, SHE MUST HAVE BONE CANCER! THIS RAW DIET ISN’T WORKING! WE’LL HAVE TO CUT OFF HER LEG!! OHMYGOD!!!

No, freak show. It’s just a splinter. Calm your crazy ass down.

I tried to treat it with honey, but after a couple of days, her limp was more pronounced (which convinced me she had a torn ligament. Hypochondriac much?).

So, off to the vet we went. I heard her scream from the back of the clinic when the doc removed it. A quarter-inch long, it took 3 people to hold her down to get it out.

Feeling a tad better about my own limitations when it comes to Pug paws, thank you.

I have never had a Pug who would let me touch the feet. Even the most laid back of them all (Truman) has a big fat fit when I try to do something as gentle as rub a little bit of honey on his boo-boo.

People give me a sideways glance when they see the excessive length in the toenail area. They gently scold me with a note of condescension when I try to explain that it’s not for lack of trying. They say with their eyes, ‘Yeah, whatevs. You just don’t want to do it, lazy human.”

SCREW ALL OF YOU!! IT TOOK 3 PEOPLE TO HOLD HER SCREAMING, 25-lb ASS DOWN TO GET THAT SPLINTER!

Post-splinter extraction, something decided to grow in its place. Great. We’re not living a real-life story of the lion with the thorn that loves the little mouse forever. That lion didn’t get a wart chaser in its paw. Or if it did, that nugget didn’t make the story.  Unlike the lion & the mouse, we get to go back to the vet because this just will not quit.

The quickest fix is the traditional medicine route. To my knowledge, there is no holistic vet in Birmingham, and I simply don’t have the knowledge right now to adequately treat whatever this growth is at home.

I’m still using honey on it, but in truth, I think the steroid is doing most of the work because in the days before we went back for the follow-up, the honey didn’t seem to make much difference.

So, it’s not time to say farewell to western medicine just yet. My hope at this point is that if it IS a wart, and thus a virus, her immune system is robust enough to fight it because she has such a healthy diet.