You may recall the early terror attacks by pre-season fleas that I battled in the Spring.

Like a dog with a bone, I have been determined to find a healthy, effective solution.

The first layer of my counter-attack was to hire a mosquito service for my yard. Now, I understand that sounds like an extravagance, and I was very hesitant to try it. But on balance, better to dose the yard than to dose the dogs.

Mosquito Squad comes while I’m at work and the dogs are safely inside. After just a few minutes, everyone can go outside, but that’s never an issue because of the timing.

Not only has it eliminated mosquitos, but it works on fleas & ticks as well. And the cost is actually about $80 less than a year’s worth of flea, tick & heartworm prevention for 2 dogs. Highly recommend.

The first one I tried was the Seresto collar. They run about $40 each and last 8 months. The collar contains similar chemicals to many of the topical treatments, but at least it’s not touching the skin in a concentrated form that seeps into the bloodstream. Collars only go on when we go outside, or board at the kennel. Otherwise, they’re on the hook with the leashes. You can’t do that with a topical.

The Seresto worked very well, but Chester (cat) was extremely sensitive to it. He lost the hair on his neck and broke out in a rash.

After that happened, I started to worry about the dogs. They didn’t break out like Chester, but still. Although a better alternative than topical or pills, the collar is permeated with pesticide, and the toxicity concerned me.

THEN, my hero, Dr. Karen Becker, posted an article about the herbal flea collars, spray, and topical that she developed for Dr. Mercola. SOLD!

Each collar contains Geraniol, which is a primary component of citronella oil, and a very effective flea, tick and mosquito repellent. The collars also contain wintergreen oil, which makes them smell like Pepto-Bismal. At $12 each, an extremely reasonable price point. Extremely safe ingredients. And, so far, extremely effective.

If you live in a highly infested area, like near the woods, you might consider the three-pronged approach of spray, topical and collar. I bought the collars, and have the spray on hand just in case.

I feel much better about NOT forcing my dogs to ingest pesticides (have you smelled a Trifexis?) or to directly apply pesticides on their skin. I know that what I’m doing is much safer, easier on the pocketbook, and it works.

In Alabama, flea season is August – October. Give Dr. Becker’s collar a try.

Y’all. Answers Pet Food, one of my go-to’s for my prepared raw rotation, has developed a new flavor.

Check it out here!

So #BOLO (not to be confused with #YOLO).

This is truly my favorite commercially prepared raw food company for several reasons.

1. They are very particular about their supply farms. They only cooperate with the best of their local grass-fed, cage-free, antibiotic-free, GMO-free, free-range you name it humane farms that care about the lives of their stock from start to finish.

2. They are a certified Green company. All of their packaging comes from recycled materials. They don’t use plastics, so everything has a bit of a simple look about it, which is appealing to me.

3. They incorporate kombucha (fermented green tea) which is SO good for the gut. Just like for you and me, replacing the healthy gut flora regularly through live, active probiotics may be the most crucial element of a healthy diet. Because without healthy digestion — which is more than just the breakdown of food we eat, it’s absorption of nutrition — everything is just passing through.

4. The Detailed line is as balanced as one could realistically hope for in a commercially prepared food. Much, much, MUCH more so than any kibble, no matter the quality. Just look at the ingredient label and compare it to what you’re feeding your dog. Even if you’re comfortable with your kibble of choice, the process the ingredients go through to transform it into tiny little round bites necessarily compromises the nuritional value for your dog.

5. Which is why I encourage my friends who insist on feeding kibble to supplement with Answers Goat Milk. It, too, is loaded with probiotics, is an easily digested protein source, and is a natural antihistamine.  Read all about it here: http://answerspetfood.com/additional.html

Detailed Answers is a great alternative to incorporate into your raw rotation.

Give it a try! 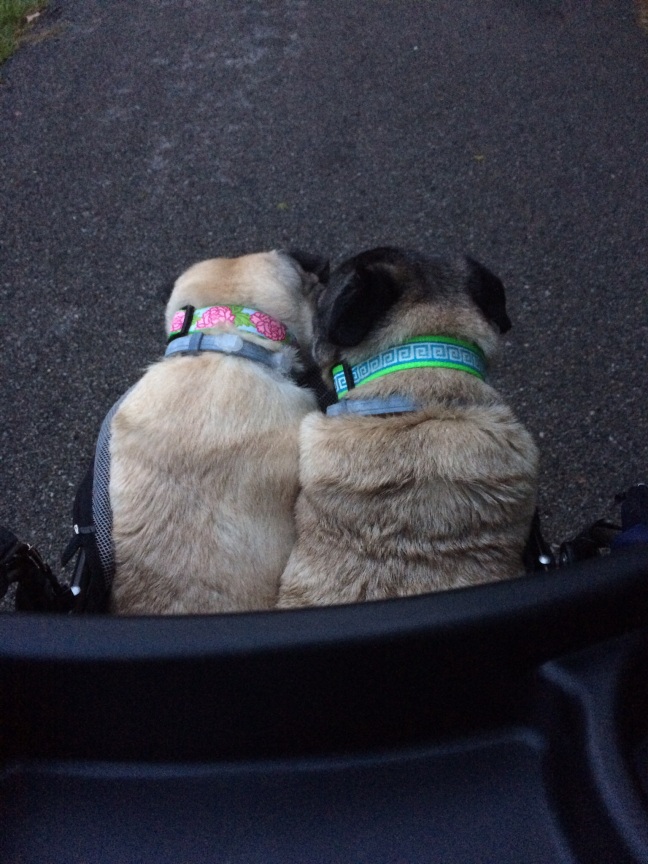 After years of coveting, I did it. I finally bought a stroller for the Pugs.

Someone from Above looked into my heart, saw my desire and plopped one right in front of me. I bought it from a friend at a reduced price, and it has changed our world!

In the South, in the summer, the heat is more than my dogs can tolerate. Some nights, it’s still near 90 degrees even by 8pm. So, we don’t get out much. The pavement is hot. They are close to the ground. They have that smushed face that makes it hard to breathe even when the heat index is not 103. The risk of over-exertion in that kind of heat is not worth the benefits exercise provides.

Pearl and Truman sit side-by-side and watch the world as it whizzes past. Any worries I had about them making a break for it were immediately dispelled. They have yet to express such interest. We walk to the park, they take care of business, hop back in, and away we go!

I can actually get my heart rate up with the speed and from pushing their collective 50lbs around the track at the park. Takes walking the dog to a whole different level. I get to improve my health accompanied by my fur-babies without risking their health.

I call it a win-win, and everybody who rolls their eyes can suck it.

We may soon be in the market for an upgrade to a jogger.

In case you might be interested, there are some great options here, and here. Check ’em out.

I recommend checking the weight specs before clicking “buy.” Bigger wheels make for smoother travel. You will need a “parent tray” for your keys, phone & water bottle. Most models come with a storage basket underneath for leads, poop bags, etc., a safety strap, and a hood to protect from the sun/rain. Sun stroke can happen even if your pup is not exerting himself. So keep an eye on him or her as you’re trotting along.

Our first jaunt around the park amplified the joy they already bring. Wish I’d bought one years ago!

Get one, and you, too, can circle the park with pride.

Kelp. It does a body good.

When I altered the fruit: veggie ratio in the Pugs’ breakfast smoothies, one of the new additions was Kelp.

I’d read about it, and wondered where in the world I’d find it. I’d pondered seaweed wrappers at the grocery store, but something in my head said, Maybe. But I didn’t take the plunge until recently.

I know y’all are like, Geez! Something else we’ve got to add to this already voluminous food regimen? But hold up. Hear me out.

First of all, it’s just another option. Something for you to consider, and when you come across it in a store, you’ll be armed with knowledge. (Knowledge being power and whatnot) (You’re welcome).

Second, don’t get overwhelmed. Do what you can and keep it simple. Every little bit you do, whether it’s adding raw goat’s milk, or the occasional farm egg, or pureed pumpkin atop a higher quality kibble than you were buying 6 months ago — to provide fresh, wHOLe foods to your dog’s diet will have a positive impact on overall health.

Third, Kelp is the bomb! It is LOADED with a bajillion minerals and vitamins including A, B12 and folic acid, calcium, magnesium, potassium, and sulfur. It also contains iodine, which helps to balance the functioning of glands (thyroid, adrenal, pituitary, etc.).

It’s fab for skin & coat, helps manage fleas (bonus!), and might be something to consider if you’ve got yourself a plump pup because it improves metabolism (a side-effect of improved glandular function).

It’s high in fiber, which combats inflammation and is also high in iron, which is important for blood production, among other things.

Lucky for me, I found Pet Kelp at The Whole Dog Market a few weeks ago, and began adding a half teaspoon to their smoothies when it came time to increase the veg/decrease the fruit. In the interest of full disclosure, I have not noticed any dramatic shifts in health that I can exclusively attribute to the addition of the kelp. But I have noticed that Pearl’s yeast and urine issues appear to be gone, the scratching has subsided, and she’s slimmed back down to a respectable roundness. Thus, their overall health is on point. And kelp is part of what we do.

So, I plan to keep doing it. Give it some thought.